When the Baltimore (Md.) City Public Schools decided to build two new schools in 2018, they resolved to power them with solar energy. The reasons for the decision were twofold. First, the school system wanted to reduce its carbon footprint to contribute to the betterment of the environment. Second, they intended to use the solar arrays as teaching tools in science and technology for their combined 922 students.

Both Graceland Park/O’Donnell Heights Elementary Middle School and Holabird Academy were designed to be net-zero buildings, meaning the amount of electricity used will be directly offset by the amount of electricity produced by the solar arrays. The buildings are also expected to earn the LEED Platinum designation, the highest level of LEED certification, for being designed, built, and maintained using green building and energy-efficiency best practices.

Together, the two schools are the first net-zero, Baltimore-area schools located in urban settings, and they are identical in every way except for building orientation. As a result, they will allow the district to compare building operations and see how they affect energy performance. If successful in reducing carbon emissions, the district might use them as prototypes for future buildings. 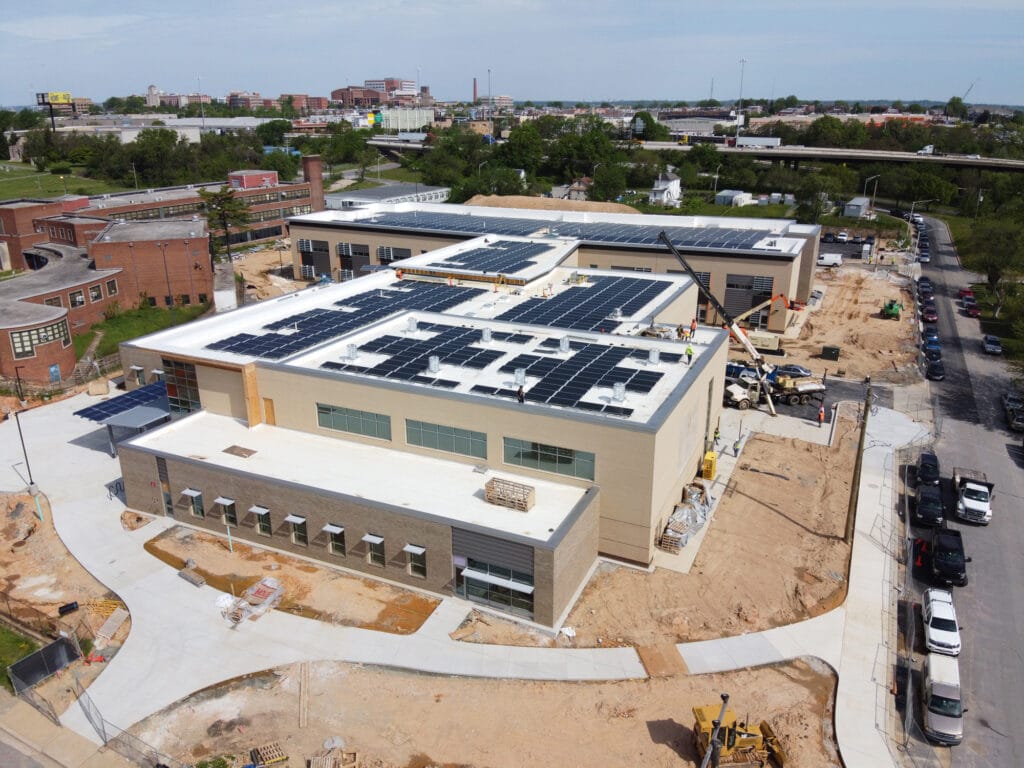 In addition to offsetting 494 metric tons of carbon dioxide, the two 500-kW systems, placed on the schools’ rooftops, also include demonstration modules (hands-on mini PV systems). This learning piece of the layout is made up of a dual-axis tracker and an adjustable-tilt module system. These will allow students to learn about harnessing sunlight to generate clean energy, the interplay of the earth’s rotation around the sun, photovoltaic module technology and other scientific concepts in the schools’ classrooms.

Both schools will feature outdoor solar energy classrooms, which will provide students with unusual learning opportunities. There will also be web-based energy dashboard systems in the school, which will allow students to monitor the effects of the solar arrays on the schools’ energy consumption. Finally, teachers will be able to use the energy-production numbers in lessons for the students, which administrators are hoping will inspire students to enter fields in the Science, Technology, Engineering, and Math (STEM) careers.

A portion of the construction cost was offset by a $5 million grant from the MEA’s Maryland Net Zero Energy Schools Program. Standard Solar was thrilled to be involved in this innovative project, which became operational in November 2020. We’d also like to thank our partners, Grounded Electric (general contractor) and Alpha Energy (contract administrator). We look forward to taking care of the operations and maintenance of the arrays for years to come.