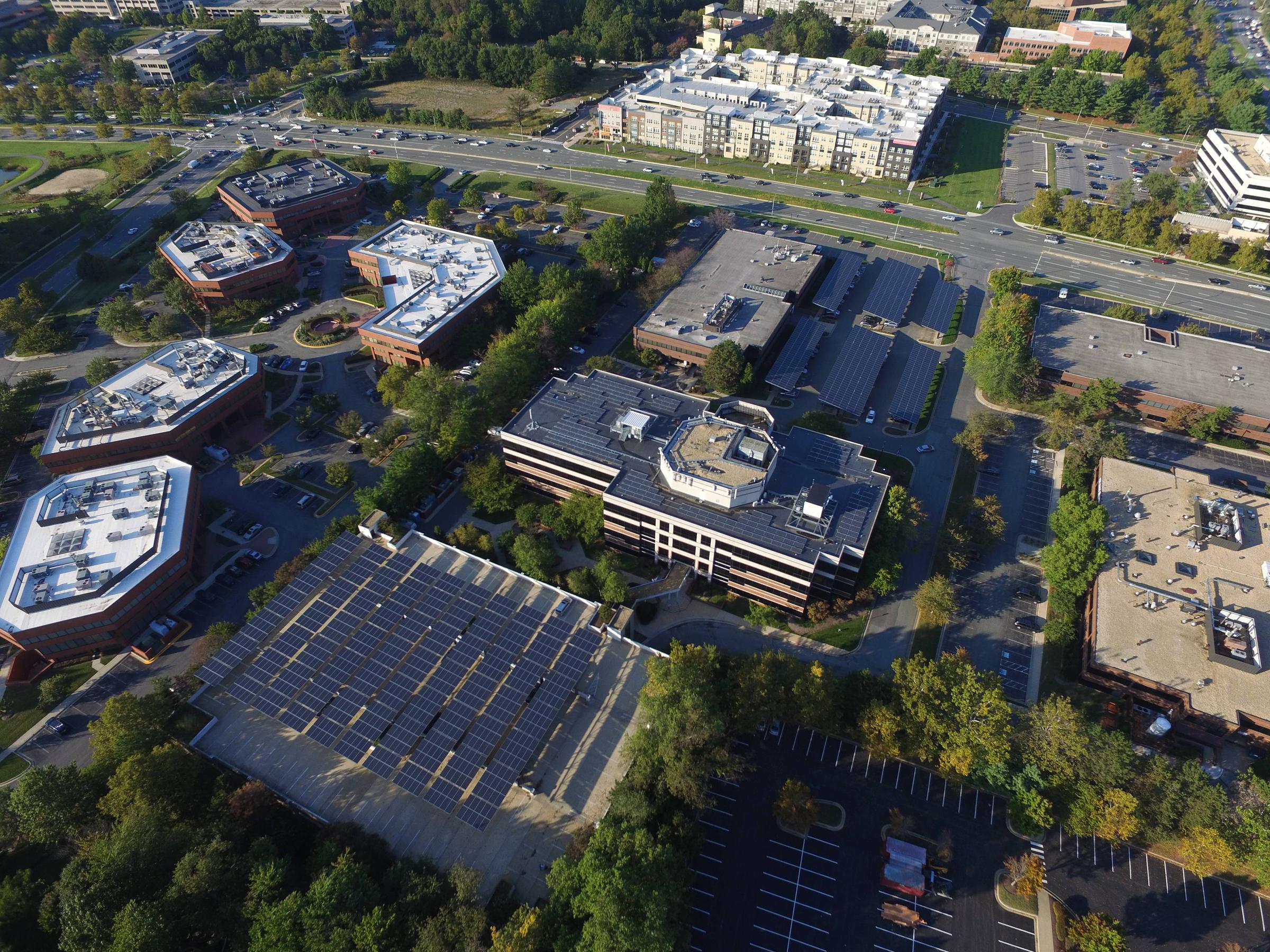 ROCKVILLE, MD—February 15, 2017 — Standard Solar, Inc., a leading solar energy company specializing in the development and financing of commercial solar electric systems nationwide, announces the completion of a 708 kilowatt (kW) solar project for Montgomery County, MD-based commercial real estate developer, DANAC, LLC. The project, featuring a parking garage solar canopy, a solar carport and a rooftop system, was completed in late 2016 and was recently named a finalist for a 2016 Wintergreen Award for Excellence in Green Building.

“Putting sustainability first has been a significant focus as we complete the final three phases of our corporate center in Rockville, MD. We selected Standard Solar for this project due to their stellar reputation for on-time, on-budget solar installations in Maryland and nationwide,” said Matt Jaeger, principal, DANAC.

The solar canopy, carport and rooftop installations combined include 2,180 solar modules and 19 inverters and are expected to produce 868 megawatt hours of energy in the first 12 months of operation. The system also utilized QuadPod™ Solar Canopies by Quest Renewables. These canopies, whose innovative design received the Department of Energy’s SunShot grant award, can be assembled on the ground and then lifted by crane for final installation allowing for a safer and more efficient worksite.

“Solar canopies on parking garages are an ideal solution for energy savings, especially in urban areas,” said Scott Wiater, president & CEO, Standard Solar. “By functioning as a power source and shade for parked vehicles, they provide added value for the building owner as well as its occupants and visitors. With innovative advances in installation speed, project economics and safety standards, it’s no surprise that solar carports are fast becoming a significant segment of our expanding portfolio.”

DANAC has been active in Montgomery County for the past 45 years and continues to expand in Prince George’s County and Northern Virginia. It has developed over 1.5 million square feet of office, residential and retail space in the last five years and over four million square feet since the firm’s inception, making it one of the most highly regarded real estate service firms in the Metropolitan Washington area today.

According to GTM Research, turnkey prices for carport structures have fallen dramatically since 2010, and even though the majority of structural costs are tied to commodity steel, they anticipate that improved module efficiencies, lower financing costs, and increased scale and competition will push prices down another 24 percent by 2018.

High-resolution photos of the completed project are available on request.

Standard Solar, Inc. is a leading solar energy company specializing in the development and financing of solar electric systems nationwide. Dedicated to making Distributed Generation (DG) solar more accessible to businesses, institutions, governments and utilities, the company is forging the path for clean, renewable energy development through turnkey solutions. With more than 100 megawatts installed, financed or maintained, Standard Solar is one of the most trusted and respected solar companies. Named one of the Fastest Growing Private Companies in America for four consecutive years by Inc. Magazine, Standard Solar operates nationally and is headquartered in Rockville, Md. For more information, please visit www.standardsolar.com