Schools, colleges and universities across America prepare students with the knowledge and learning they need to navigate the knowns and unknowns of the future. Today, education systems are faced with applying their lessons to themselves to navigate the unknowns of hybrid virtual operations and the knowns of traditional classroom commitments. Knowns that continue include commitments to sustainable practices and environment-related programming that impart lessons to students about caring for the natural world, exploring innovation, and lowering operational costs.

Educational institutions account for approximately 11% of energy consumption by buildings and 4% of carbon emissions in the country. Students and administrations often see solar and energy management as effective ways to reduce consumption and lower their greenhouse gas emissions and dependence on outsourced fossil fuels; a 2019 study demonstrated that solar has the potential to reduce the education sector’s carbon footprint by 28%.

Schools and higher learning institutions continue to have the ability to access funding that allows for the inclusion of solar and other sustainable initiatives, as well as financing that adds new trends such as solar with battery storage and solar energy generated from offsite locations. Given Standard Solar’s long-time investment in solar for schools, we felt it was fitting to explore this subject in some detail. Our three-part series about solar financing for American educational entities explores the various mechanisms available to our nation’s schools as they seek to operate sustainably and adopt new trends. In this first segment, we assess the state of solar and financing in K-12 schools and universities and highlight the most ubiquitous of the funding options, the Power Purchase Agreement (PPA).

The Current State of Solar in Schools and Financing

Currently, over 7,330 American K-12 schools have deployed solar, making up 5.5% of all K-12 public and private schools and 16% of all school districts. In 2017 more than 400 universities and colleges had adopted solar, totaling about 710 megawatts (MW). Leading the effort over the past decade, over 800 educational American institutions became signatories of the American College and University Presidents’ Climate Commitment, which set goals for reducing greenhouse gas emissions on their campuses. Since our founding in 2004, Standard Solar has understood the importance of supporting schools and universities seeking to go solar and has deployed over 17 MW in educational institutions over that time.

Challenged with a new hybrid schooling structure and traditional budget cuts and rising energy costs, many educational institutions are open to finding ways to finance capital-intensive energy efficiency campus upgrades. The costs can be particularly high for infrastructure-based technology like solar. The traditional PPA has adapted to accommodate many new trends while solving the conventional financial barriers and concerns about investment financial performance, equipment maintenance, market regulations and tax laws. Standard Solar is positioned to support K-12 schools and higher learning entities with a number of viable funding options. 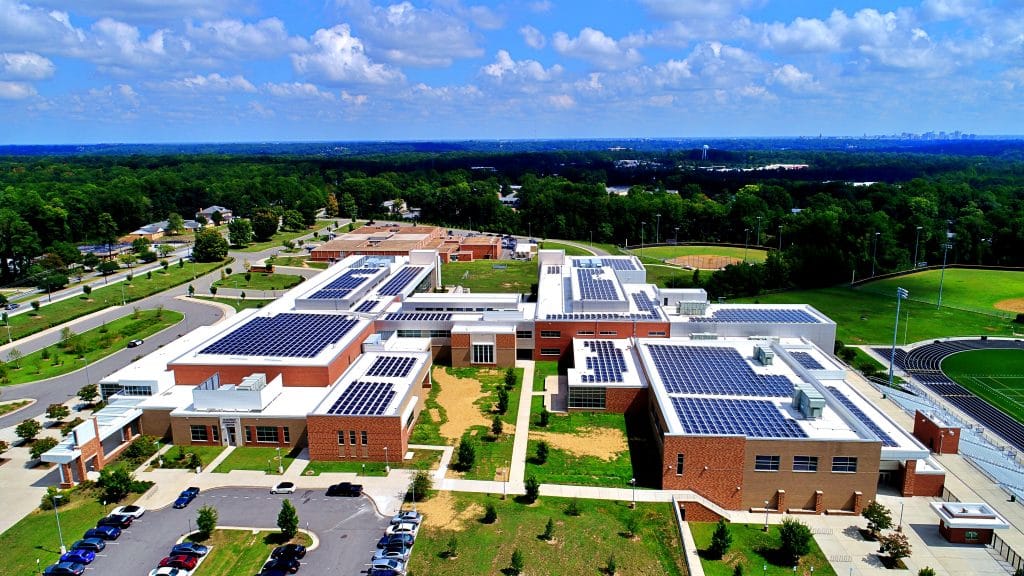 For decades, the Power Purchase Agreement (PPA) set the trend for implementing solar for on-campus projects at schools and universities, mainly through rooftop and carport systems. A PPA is when an entity buys power at a set rate from a project developer that designs, builds, operates, and maintains an array at a negotiated rate for a specified term. This delivers long-term savings without the responsibility and cost of ownership of the system.

As of 2016, financing solar through PPAs facilitated over 100 MW of solar at universities, and 79% of solar installed at schools was funded and operated by a third party. For example, in Virginia, four school districts installed over 10 MW of solar across some 30 school buildings, utilizing conventional PPAs toward part or all of the cost.

A trend toward virtual solar generation was launched. In 2014, George Washington University, American University and several partners developed one of the largest offsite solar PPAs in the eastern United States. Based in North Carolina and exceeding 52 MW over 300 acres, the project provides solar power credits at a quantity not available to limited urban campuses in Washington DC.

The PPA has proven to be an ideal funding mechanism for many solar companies and the educational institutions they work with. It offers schools an expedient, cost-effective way to achieve goals and become leaders for their students and the country’s clean energy transformation.

In the next part of the series, we’ll investigate ways educational institutions can use additional financing options and grant programs to incorporate the benefits of new trends such as storage and virtual offsite generation as tools to achieve their expanding sustainability goals.

Floating Solar: The Next Solar Frontier?

Powering the future at @ColoradoStateU with our partners @NamasteSolar, Solaris Energy https://source.colostate.edu/solar-installations-renewable-energy/