Project financing and the basics of PPAs

From the East Coast to the West Coast and everywhere in-between, businesses and organizations of all types—universities, colleges, municipalities, government buildings, agricultural and farming operations and more—are realizing the benefits of solar power. One popular option available for financing commercial-scale installations is a power purchase agreement, or PPA. Many of the projects that we have worked on in the last few years or so have come to fruition as a result of this kind of partnership, from the Perdue installations in Delaware and Maryland to Washington, DC’s American University. If your organization is interested in benefiting from solar energy, this type of financing should most certainly be on your radar. So how does it work?

PPAs are arrangements through which a host customer agrees to provide the physical property on which a solar PV system is built, and purchases the resulting electricity at a stable price for a number of years. The system is owned and maintained by the developer, or solar service provider.

PPAs are attractive to organizations for several reasons. The arrangement allows an organization to fix the cost of electricity for many years, and do so without much of an upfront capital investment. The installation also increases the valueof the property on which it’s built. In addition, the organization can meet its own internal goals for sustainability while making a visible, tangible commitment to the environment.

For example, in June of last year, we installed a 753 kW system for Maryland’s Anne Arundel Community College (AACC). The entire photovoltaic (PV) system was installed on top of a covered parking structure – the largest such system in Maryland and one of the largest carport systems on the East Coast (pictured below). It is expected to generate approximately one million kilowatt hours of electricity in its first year of operations, enough to power about 100 average homes and the equivalent of eliminating greenhouse gas emissions from more than 77,000 gallons of gasoline per year, or over 1 million gallons over the next 15 years. The system is projected to save the college more than $300,000 over the next 15 years. 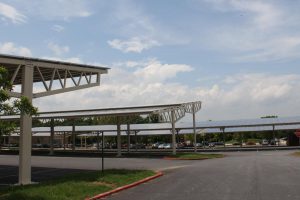 AACC received a $750,000 grant from the Maryland Energy Administration via the American Reinvestment and Recovery Act to contribute to the financing of the system. Washington Gas Energy Services (WGES) provided the financing for the balance of the project costs and owns and operates the PV system. WGES will sell the output of the solar panels to AACC through a 15-year PPA, enabling AACC to host the solar project without any capital outlay.

Prefer a visual of how a PPA works and all the parties involved? The image below (from the U.S. EPA) does a pretty good job (we think) of laying out the different entities and responsibilities involved.

We’ve been in the position of both the installer and solar services provider for a wide variety of projects. Our experience has given us a wealth of knowledge to draw from, which we are happy to share with organizations that are considering adding solar power to their facilities. If that’s you, we are here to help.