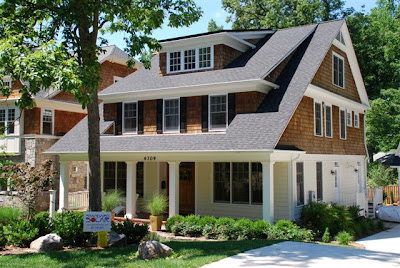 It’s a good thing Joe Hansen is so eager to talk about the new solar roof he put on his house.

Because everybody in my Bethesda neighborhood wants to talk to him about it.
Sitting in his kitchen on a sunny Sunday morning, the shades drawn to keep the house cool, Hansen reels off the figures everybody asks him about:It cost him $41,000 to install.
He estimates that cost will be offset by roughly $30,000 in federal, Maryland and Montgomery County tax credits and grants.
In just two weeks, he has chipped $78 from his electric bill and longer term he figures his solar system will cut his bill by one-third.
No, his new gear won’t ever allow his family to live “off the grid,” though he will be able to sell power back to Pepco now and then.
And he figures most of his neighbors can’t go solar like he did, because their lots have too many trees blocking the sun.
Trees, in fact, figured greatly in Hansen’s decision to go solar. After moving into his newly built home in May 2007 with his family, he heard about the minor uproar that ensued in the neighborhood when Rockville-based builder Carter Wilson removed a large number of trees to make way for their home and another on the corner.
“A lot of trees had to be taken down,” he says. “I felt like I should do something to counter that.”Hansen points out the irony that, without the trees, “my roof now has an unobstructed southern exposure” ­ perfect for solar panels.
He settled on a 4.6-kilowatt system, considered large for a home. The panels, which are nearly invisible on top of the highest roofline, deliver raw energy to his circuit panel, with a meter on a kitchen wall telling him how many watts the sun provides at any given moment. On a sunny Sunday morning, the system was sending down about 3,400 watts ­ roughly equivalent, he said, to what his central air conditioning requires. In the morning or early evening it might generate only 600 watts, he said. The grid continues to make up for the rest of his home’s energy load.