And here I thought The Solar Foundation’s (TSF) 2016 National Solar Jobs Census, which showed that the solar industry created one out of every 50 jobs in the U.S. economy last year, would be the best news the industry could receive.

Turns out, that was only the beginning.

TSF released more information recently, and its findings showed the industry produced $156 billion in economic activity last year. Let that number roll around in your head for a moment. For comparison, that means the U.S. solar industry alone produced more economic activity than the gross domestic products of 134 countries in the world, ranking us between Kazakhstan and Iraq. 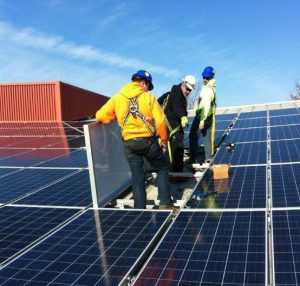 Impressive enough. But what got me even more excited was the interactive map TSF released with those jaw-dropping numbers. With a few mouse clicks, the map allows users to dig deeply into the solar activity by national, state, metropolitan area, county, and congressional district level. A solar geek like me could get lost for hours in data that discrete and focused and not be bored for a minute.

Here’s what it potentially means: With such detailed information on the real economic effects solar is having, the time has come to raise an army of solar advocates throughout the nation—homeowners, businesses, casual observers, all of them. And once mobilized, we can use that army to flood local, state and national legislatures with passionate letters of support from the people that supposedly matter to them most, the voters.

We’ve heard, repeatedly, that nine out of 10 Americans support solar energy. That is not illusory and has been proven, again and again, in poll after poll. But, and this has stuck in my craw for my entire solar career, unless we do something with that support, it’s a feel-good number without any impact.

TSF’s map points the way to a nearly unprecedented opportunity for the industry to whip up the support that has remained dormant for so long. I am heartened to see the Solar Energy Industries Association (SEIA) is mobilizing in the state-by-state fights instead of focusing solely on national issues, which other than defending the 30% ITC have largely faded into the background for now. It’s a start.

As a result of the November elections, we’ve seen more Americans than ever before mobilize in the name of causes they support. Why shouldn’t the solar industry, which I will remind you has contributed an amount to the U.S. economy that equals the state of New York’s entire budget for 2016 or the amount of money the country spends annually on overseas military bases, be able to produce that kind of support?

I’ve hammered this point home for years, but that support won’t just materialize out of thin air. It’s going to take hard work, dedication and, yes, some tedious efforts to make it happen.

But if we put in the hours and use TSF’s roadmap, we will find our way to a time when solar energy will be the norm than the exception. As my friend Nat Kreamer recently wrote we are in the Solar Century and the revolution is already under way—let’s get it across the finish line.