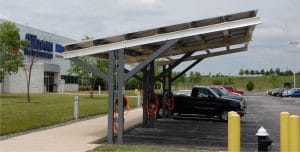 When asked by General Motors to design, build and provide a leasing program for a solar EV charging station, TimberRock turned to its long-time partner Standard Solar, Inc. to support the execution of the project. Standard Solar and TimberRock worked with General Motors to design a 10kW system with four level-1 (120V) charging stations and four level-2 (240V) fast charge stations underneath an attractive solar canopy. The system’s anticipated energy production is 12,500 kW-hrs per year; enough energy to fully power a fleet of six Chevy Volts.  The environmental benefits of doing so are significant with twelve fewer tons of CO2 gas per year released into the atmosphere.  In addition to charging EVs, the system also ties directly to the building so that when the charging stations are not in use, the energy can be utilized throughout the building.

General Motors is at the forefront of electric vehicle development and is making significant investments in the White Marsh facility.  “We have recently completed a roof-mount solar system and have also broken ground on an expansion program so as to produce EV motors in Maryland, said Rob Threlkeld, GM Real Estate and Facilities Manager – Green Initiatives.  “TimberRock’s solar EV charging solution was a natural complement to these other investments and we’ve already begun work on other projects with TimberRock.”

According to TimberRock CEO Brent Hollenbeck, “The introduction of production EVs has exciting and positive implications for our dependence on foreign or polluting sources of energy.  However, if the vehicles are charged via grid-provided electricity – often from coal-fired power plants – the benefits are mitigated.  Solar-based EV charging makes sure that only renewable, local electricity is used to charge clean vehicles.”